For New Brunswick’s Poorest Residents, a Path to Better Health 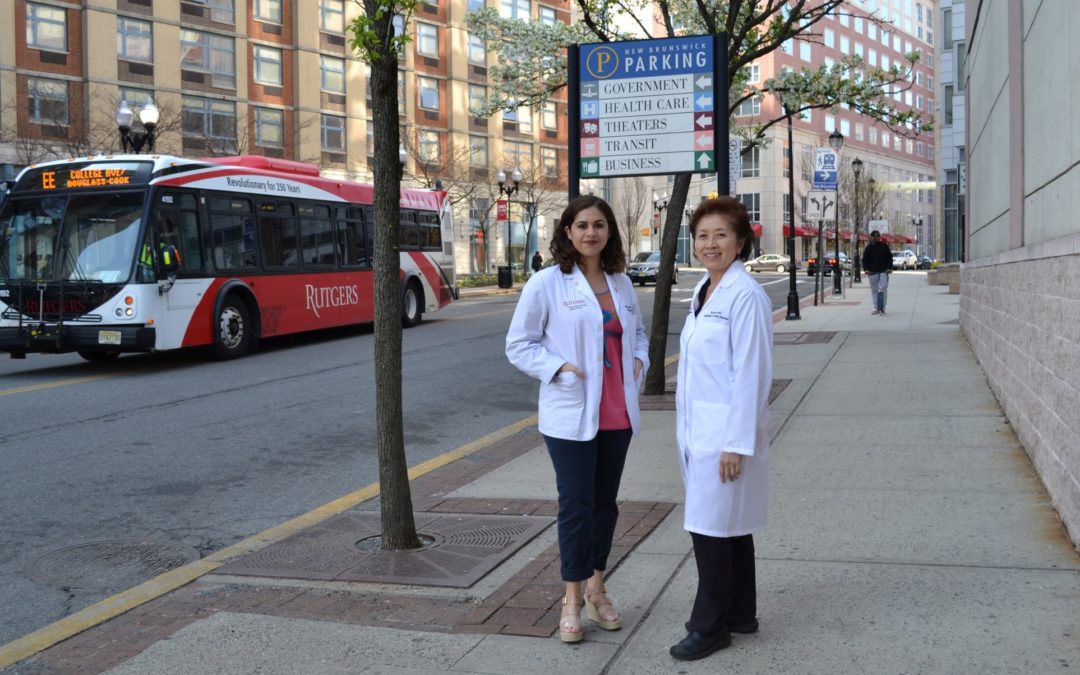 By definition, global health involves the pursuit of health equity worldwide. This includes Rutgers’ local communities, where disparities in health and health care access are influenced by such factors as race, socioeconomic status, gender, and age.

Located within the Eric B. Chandler Health Center, HIPHOP Promise Clinic relies on collaboration between Rutgers and community partners, including Karen WeiRu Lin, professor of family medicine and community health at the medical school (RWJMS), and her mentee, Aisha Van Pratt Levin, who graduated from RWJMS on May 20, earning a medical degree.

In 2017, as a second-year medical student, Van Pratt Levin—inspired by her own experiences growing up in Tijuana, Mexico—approached Lin with an idea aimed at empowering the clinic’s patients to become more active in their health care.

International inspiration for a local intervention

“In Mexico, all citizens use a cartilla de salud, or health booklet, to record details of their health and health care activities,” Van Pratt Levin says, referring to a nationwide program launched in 2009 as part of the country’s Estrategia Nacional de Promoción y Prevención para una Mejor Salud (National Promotion and Prevention Strategy for Better Health).

“They not only keep track of medical appointments, but also their weight, blood pressure, lab results, illnesses, prescriptions, mental health, exercise, and eating habits. The cartillas are the backbone of health care appointments in Mexico,” she says.

The cartillas also are useful for communicating among family members, caregivers, and health care providers and, in an emergency, could be a lifesaving source of information about a patient’s medical history.

A passport to healthy living

Lin, who is assistant dean for global health at RWJMS and has practiced in community health for more than 30 years, says that numerous studies show that active patient involvement in their own health management positively influences their health outcomes.

At the onset of the project, they asked patients for feedback on the health passport’s design and functionality using a prototype based on the Mexican cartillas.

“Some patients thought the blood sugar section, for example, was overwhelming because they were recording their levels four times a day,” Van Pratt Levin says. “Patients also suggested a section for personal health goals.”

As the co-principal investigator of the seed grant, Lin oversaw the data collection and worked with the medical students to redesign the health passport. In September 2018, a sample of 40 patients began using the new passports.

For six months, Lin, Van Pratt Levin, and RWJMS medical students observed the dynamics within the clinic as related to the health passport initiative. In March 2019, they conducted follow-up surveys with the 40 patients.

Anecdotally, Van Pratt Levin says that they gained clearer insight into the barriers affecting the health passport program. For example, she says that it appears to have been challenging for the medical students and other clinicians to find time to incorporate the passports into their patient appointments. “This preliminary observation is consistent with the literature on similar projects,” she says. “It needs to become part of the norm, with buy-in throughout the clinic’s leadership and full staff.”

The clinic’s above-average volume of patients during this time period also may have been a limiting factor, she says.

Where to go from here

“Now it’s under consideration for the first- and second-year medical students to be responsible, mainly, for interacting with their patients on using the health passport,” Van Pratt Levin says. “They spend a lot of one-on-one time with the patients and help them navigate their care, within and beyond the clinic.”

The project team is still reviewing the pilot data, looking at quantitative measures of patients’ health improvements (related to diabetes, hypothyroidism, and hypertension, for example) and qualitative information about the patients’ and providers’ experiences using the passports (changes in understanding of their conditions, as well as feelings of empowerment and participation).

Though Van Pratt Levin has graduated, the health passport program will continue at HIPHOP Promise Clinic, under Lin’s leadership, as an ongoing project involving RWJMS medical students. “Dr. Lin’s mission is for this to become part of the natural flow at the clinic, which takes time to develop,” Van Pratt Levin says. “Her vision is beyond Promise Clinic—she wants to expand this throughout the city of New Brunswick. This is only the beginning.”