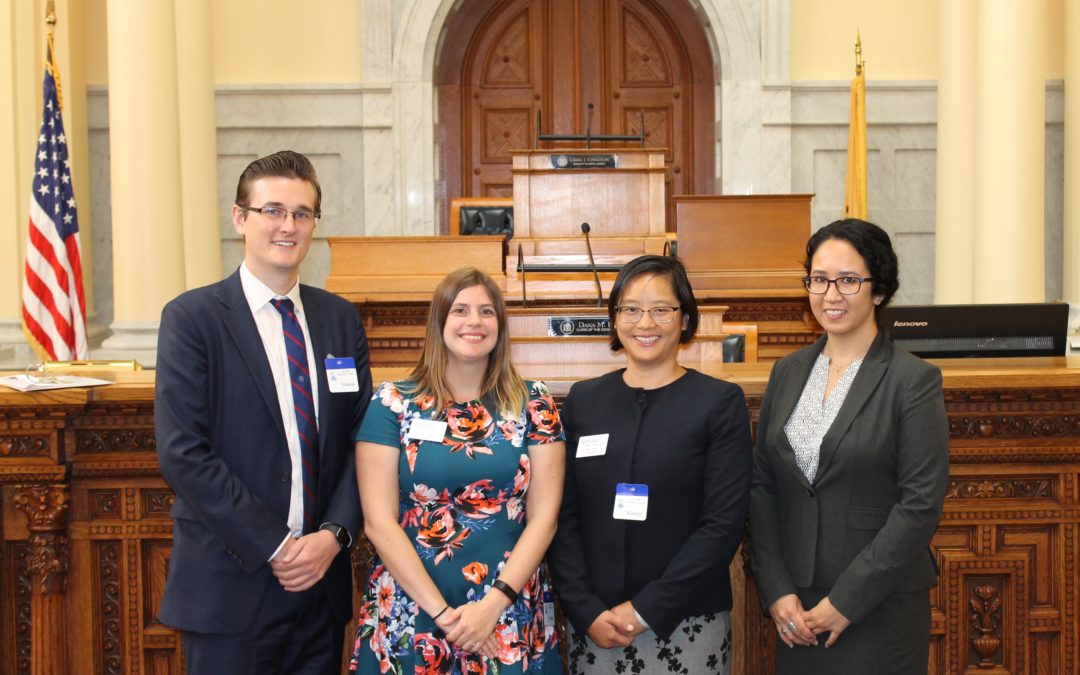 When Shin-Yi Lin gave birth to her eldest child in a New Jersey hospital eight years ago, she experienced difficulties New Jersey’s mothers can face in getting appropriate maternity care – a doctor who made a racist comment during her labor, a rush toward a Cesarean birth, and uneven breastfeeding support. She used her skills as a researcher to learn how to be a better advocate for herself during her two later pregnancies.

Last January, Lin, a biologist, was searching for more formal avenues to pursue her passion for science in the public service. After applying and being accepted to Rutgers’ Eagleton Science and Politics Fellowship program, she was placed at the New Jersey Department of Human Services to work on health care policy for NJ Family Care, the state’s Medicaid program, in August. She calls it “the perfect placement.”

Lin (pictured above, second from right) is using her scientific background to help implement recently passed legislation to improve maternal health outcomes, such as working to put New Jersey among the first handful of states to cover doula services under Medicaid. Research has shown that doulas may improve many birth outcomes, but doula support has often been accessible only to those who can afford to pay privately.

“As a scientist who cares about doing work for the common good, I knew I was in a unique position as both a researcher and a mother to do more for my community,” the West Windsor resident said.

Lin is among four scientists (pictured) appointed to full-time positions in the New Jersey Departments of Human Services, Health, and Transportation and the Legislature. The yearlong fellowship is part of Rutgers’ Eagleton Science and Politics Initiative. The fellows were selected from a pool of candidates with Ph.D. or equivalent degrees in the sciences for their interest in bringing scientific expertise to politics and government.

“The Eagleton Science and Politics Initiative addresses the need for scientists, elected officials, and policymakers to work together to better inform public policy,” said Anna Dulencin, senior program coordinator for the initiative. The fellows are currently serving as science advisers to agency leaders and legislators. All four have ties to the state and expressed their eagerness to improve the lives of New Jerseyans.

Applications for the next fellowship cohort are due January 17, 2010. Learn more and apply online.