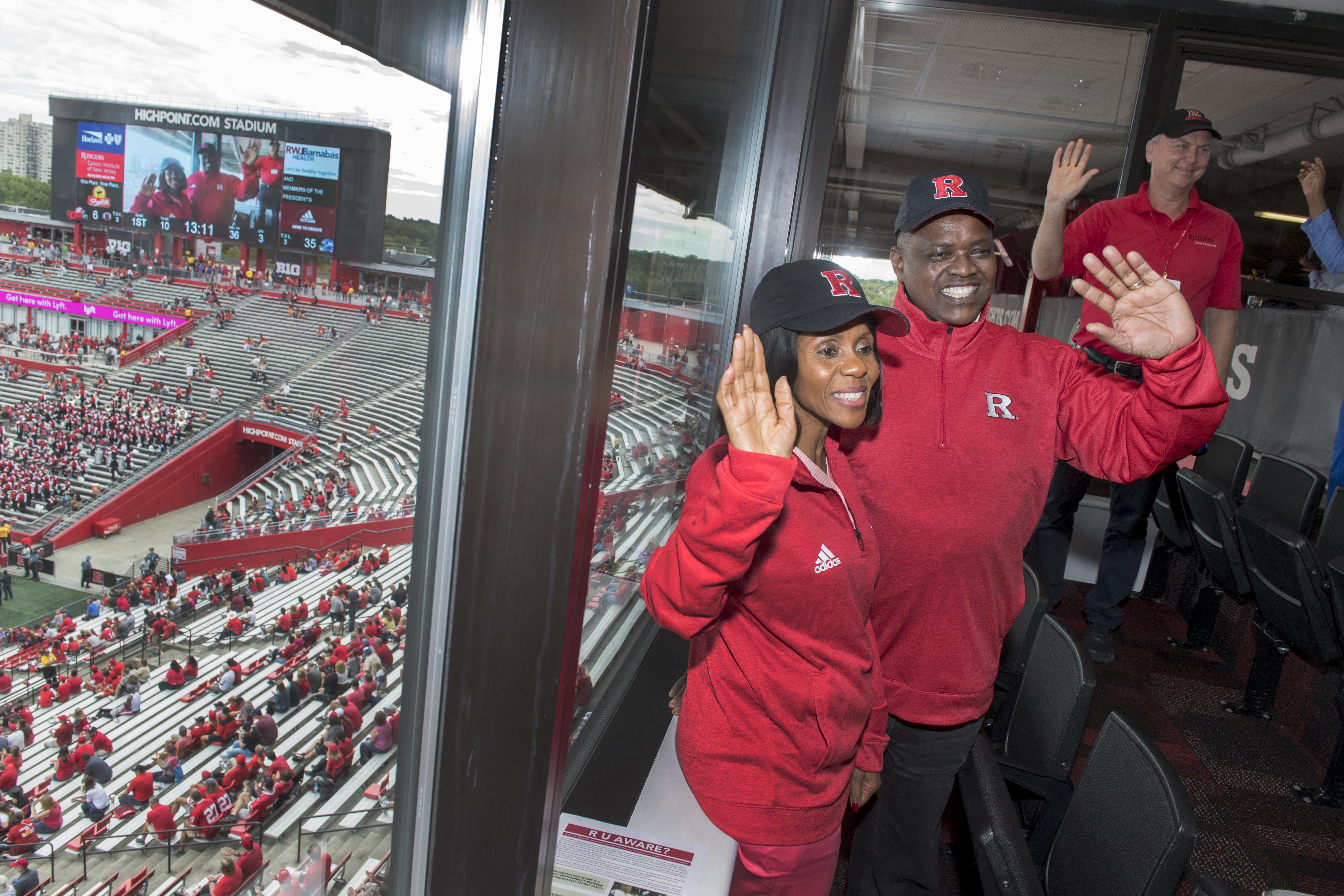 On September 22, during the third quarter of the Rutgers football game against Buffalo, two extraordinarily distinguished guests were announced to the crowd. President Mokgweetsi Masisi and First Lady Neo Masisi of Botswana were watching the game from box seats in High Point Solutions Stadium.

Rutgers fans cheered when the First Couple of Botswana, a nation in southern Africa, appeared on the scoreboard—waving happily with their daughter, Atsile Masisi, off camera but nearby.

President Masisi, his family, and a delegation of ambassadors and high-ranking government officials from Botswana were in the stadium as guests of Rutgers President Robert Barchi and his wife, Assistant Professor Francis Barchi. Named Botswana’s fifth president in April, President Masisi is in the United States for the United Nations General Assembly, which runs from September 18 to 28 in New York.

Rutgers was a part of President Masisi’s trip because of a newly formed partnership between the University of Botswana and Rutgers. This Botswana-Rutgers Partnership, an outreach of Rutgers Global Health Institute, is a significant collaboration to help improve Botswana’s health care system.

The University of Botswana, along with the country’s Ministry of Health and Wellness, has asked for Rutgers’ collaboration in three areas to start:

During their Rutgers visit, the Botswana delegation met with leaders from across Rutgers. Included among them were faculty who have been addressing health issues in Botswana for many years: Richard Marlink, director of Rutgers Global Health Institute; Francis Barchi, who has worked on gender violence, cervical cancer screening, and bioethics issues in the country; and Eric Garfunkel, Rutgers’ vice president for global affairs, who has been involved with the Botswana Institute for Technology Research and Innovation. View more images from the day:

University of Botswana Vice Chancellor David Norris and colleagues spent two days at Rutgers in August, and President Barchi and other Rutgers officials will travel to Botswana in October to learn about the country’s needs in greater detail.

More information will be posted here as the work of the partnership unfolds.