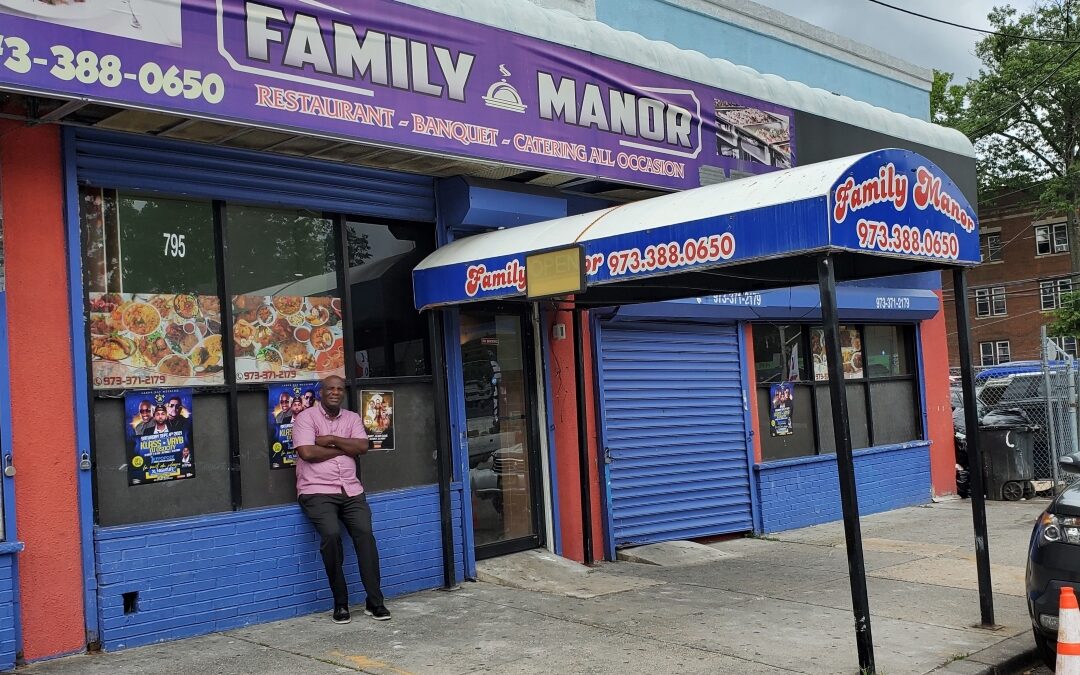 It was no one’s idea of a vaccine clinic—which is almost certainly what made it so successful. On Sanford Avenue in Newark, the Family Manor restaurant was thronged with diners enjoying authentic Haitian food, such as patties filled with savory beef, chicken, and fish, as well as the upbeat atmosphere.

The guests were happily digging into the complimentary bites, but they had actually come to the restaurant for a more important purpose: to receive their COVID-19 vaccinations.

They had learned about the pop-up vaccine clinic from Micano Evra, who owns Family Manor and is the host of a radio show popular with the Haitian community in Newark’s West Ward and nearby Irvington and East Orange. The clinic was organized by Rutgers Global Health Institute through its Equitable Recovery for New Jersey’s Small Businesses program, in collaboration with the nonprofit Partnership West, Inc. (PWI); Rutgers University–Newark’s Office of University-Community Partnerships (OUCP) and its Center for Health Equity and Community Engagement (CHECE), co-founded with the School of Public Affairs; and Evra. He had publicized the clinic on his radio show and asked listeners to come. He was gratified, but not surprised, when 86 people showed up to his restaurant that day, eager to feast and get their jabs. PWI also advertised the event to local residents and business owners and funded the cost of food for those receiving vaccinations.

This vaccine clinic is one example of the Equitable Recovery program’s local efforts to shore up vulnerable communities and the small businesses that are their lifeblood—as both have faced considerable challenges throughout the pandemic. The clinic at Family Manor was a celebrated success, especially in comparison with the program’s previous vaccination efforts in Newark, which, according to Equitable Recovery program manager Arpita Jindani, had typically drawn 18 to 20 attendees.

What made this and other pop-up clinics organized by the Equitable Recovery team so successful is that they rely on what Jindani calls “tailored outreach”—an approach that includes bringing clinics into the community, rather than asking the community to go to the clinics, as well as the involvement of trusted messengers within each community. “People like Evra, who help spread the word about the safety, efficacy, and availability of vaccines,” Jindani says.

This is necessary because distrust of the medical establishment on the part of minority populations has contributed to dramatically lower vaccination rates in those communities, which have suffered disproportionately from COVID-19, says Jindani.

Evra concurs: “Family members and good friends of mine have passed away from COVID,” he says. “I hosted the clinic because I believe it’s very important we protect each other.”

To date, there have been eight COVID-19 vaccine clinics in Newark’s South and West wards that the Equitable Recovery team led or helped organize. The staff continues to refine its approach, based on feedback from attendees—and non-attendees—as well as community partners, health officials, and university colleagues.

That input has been invaluable. South Ward Councilman John Sharpe James, another trusted messenger, says that the clinics succeed “by coming directly into the community, engaging residents where they work and live, as opposed to having them come out to some office in an area they’re not familiar with.” Other Equitable Recovery program clinics have been held in houses of worship, like the South Ward’s Greater Abyssinian Baptist Church and Restored Holiness Church of God as well as Sunlight Missionary Baptist Church in the West Ward.

The Equitable Recovery program began in the fall of 2020 with a pilot project in New Brunswick to help minority-owned small businesses stay afloat during the pandemic by educating them about and helping them apply COVID-19 safety measures (like masking and social distancing) and economic measures (like seeking government loans).

Early in 2021, the program expanded to Newark, specifically the South and West wards—low-income neighborhoods where COVID-19 had hit with particular ferocity. Small, minority-owned businesses based there were in great need of assistance, which became readily apparent to the Equitable Recovery team thanks to insights from Rutgers colleagues and local partners who have been involved in these communities for quite some time.

These Newark-based people and organizations provide knowledge that can’t be found in a research database. PWI executive director Cesar Vizcaino, for example, guided the Equitable Recovery team to Sanford Avenue in the West Ward and shared first-hand accounts of frustrated small business owners struggling to bounce back. Similarly, Ronice Bruce of the South Ward Special Improvement District introduced the team to Councilman James and connected them with faith-based organizations.

“Trusted leaders and institutions are critical to the success of such initiatives in urban communities. Vaccination hesitancy in Newark is rooted in long histories of disregard for input from residents,” says Newark native Diane Hill, the assistant chancellor for university-community partnerships at Rutgers University–Newark and a core faculty member of Rutgers Global Health Institute. “Any effort that neglects to connect respectfully and meaningfully with residents and stakeholders is doomed to fail.”

Hill’s sustained work in the community was the catalyst for OUCP/CHECE’s proven, successful model of respectful, mutually beneficial, intergenerational community engagement that harnesses the knowledge of community as well as the expertise of university partners. Through her and her teams’ experiences, relationships, and groundbreaking work throughout Newark—especially in the West Ward, stemming in part from the OUCP’s West Ward Community Coalition initiative and an existing collaboration with PWI—Hill helped with navigating the nuances of vaccine hesitancy and access issues within the ward. Her leadership has been instrumental in helping to inform Rutgers Global Health Institute’s vaccination efforts in the communities there.

Helping People Get Vaccinated Is a Way to Help Small Businesses

To gauge the small business community’s specific needs during this challenging period, Equitable Recovery team members Etphane Barthelus and Licelot Gonzalez, both area residents, sought out and spoke directly with business owners in both wards. They learned that these neighborhoods needed help to improve their vaccination rates. In August, for instance, 70 percent of New Jersey residents aged 18 and older were fully vaccinated, as opposed to only 54 percent in Newark.

These community-centered connections paved the way for the Equitable Recovery team to build rapport within the South and West wards. The result? Productive conversations through which small business owners express their concerns candidly, display their fortitude, and talk about what would and wouldn’t work for them.

For example, because the small businesses in question often are staffed by a single person, it is imperative that the Equitable Recovery program hold its vaccine clinics close to the wards’ business corridors, making it easier for owners and employees to get vaccinated.

Business owners and community leaders also raised the issue of trust. Some residents were as wary of outsiders as they were of the vaccines themselves, Jindani says, so those trusted messengers became of paramount importance.

Language barriers also play a role. Spanish is a predominant language in both the South and West wards, and many residents in the West Ward speak Haitian Creole. It’s critical that all materials, like handouts addressing vaccine FAQs, be available in those languages, and that speakers of Spanish and Haitian Creole be available at the program’s clinics.

The Equitable Recovery team also takes great care to communicate respectfully, so as not to belittle or dismiss residents’ concerns, push the vaccine on them, or shame them for refusing it.

“It’s all about human connection and honest conversations,” Jindani says.

That was certainly the case when she was working at a South Ward pop-up clinic hosted in collaboration with Councilman James in September. A young man walked up to the registration table and told her he was frightened of COVID-19 but equally frightened of getting the vaccine. Jindani gave him as much time as he needed to voice his concerns. As they spoke, it became clear that he was unemployed and might also lack a permanent place to live. Because returning for a second shot could be difficult for him, Jindani suggested he consider Johnson & Johnson’s one-shot Janssen vaccine. After a 15-minute, no-pressure chat, he decided to get it.

“Spending time in the communities that surround Rutgers and throughout New Jersey and getting to know the people is so important. What are they dealing with on a daily basis? That’s what matters to them, and so it matters to us,” says Kevin Lyons, a core faculty member of Rutgers Global Health Institute. Lyons, an associate professor at Rutgers Business School–Newark and New Brunswick, has been doing research in Newark related to municipal purchasing disparities, with an eye toward supporting local economic development and resilience by way of ensuring that locally owned businesses have equitable opportunities to offer their goods and services to the city’s large anchor institutions.

“Everyone is grappling with a lot right now. Their openness about their experiences is invaluable, because we can only begin to have an impact once we understand those dynamics better,” says Lyons, whose business acumen and networking connections helped the Equitable Recovery program launch in the South Ward.

Opportunities for Learning Outside the Classroom

Each Newark resident vaccinated represents a small victory in the huge effort to keep the city safe. Through November, Newark’s vaccination rate for residents aged 18 and older was up to 69 percent.

“It really takes a village. Everyone involved has contributed something distinct at various points along the way,” Jindani says.

And everyone is learning a lot. “This university-based program also serves as a way to educate and provide opportunities to Rutgers students, current and past, as they embark upon their own pathways in community engagement and global health,” says Hill, who also is an assistant professor in the School of Public Affairs and Administration on the Newark campus.

For example, Jindani herself is a doctoral student in the School of Communication and Information, and she is integrating her Equitable Recovery work with her research interests related to health equity and communication barriers. Program coordinators Barthelus and Gonzalez are both Rutgers grads—from the School of Public Health at Rutgers Biomedical and Health Sciences and the School of Arts and Sciences in New Brunswick, respectively—who joined Rutgers Global Health Institute’s staff eager to enhance the university’s service mission. Meanwhile, a component of Willis’s doctoral education in the School of Public Affairs and Administration includes serving as a liaison between PWI and OUCP/CHECE, and Munz, who is pursuing a master’s degree in public administration, is experiencing the scale-up of a local approach to global health.

Building Trust Is Key to the City’s Health

A key concept in global health—that health is determined by a multitude of factors, including social and economic standing—is also a cornerstone of the Equitable Recovery program. That’s why the program’s offerings extend beyond support for medical or health-specific needs. For example, assisting small businesses in overcoming the digital divide is necessary in order to apply for loans and grants. If businesses can’t afford to stay open, families and communities suffer, Jindani says.

And to maintain trust in areas like the South and West wards, says Hill, it’s particularly important to sustain long-term relationships. In the past, she says, outsiders would come in offering help “and would disappear as soon as their grant funding ran out.” That’s why Jindani views the vaccination effort not as an end in itself, but rather as an introduction to Newark’s small business community, with all its pressing financial and health needs that the Equitable Recovery program can help to address.

“Just being there, showing up, building trust takes time,” Jindani says, “and that’s what we’re trying to do.”